Stephen Shapiro has always considered himself to be a nerd. He was part of the math club, he loved chemistry and wanted to be a chemist, finally, he became an engineer.

He was always using his left brain, engaging in engineer style endeavors, but he was working in an era when innovation was crucial and business growth, and he felt that he had to become more innovative.

His first job was to figure out how to make companies more efficient. What he discovered was that when companies became more efficient, they reduced the workforce, and thus if Stephen did a good job, many other people would lose their jobs.

Evey one is innovative, everyone is creative, we just participate in different ways.

I decided to optimize the innovation process

The best innovation starts with a problem

To find better solutions we need to ask better questions

The key of a leader is to create other leaders 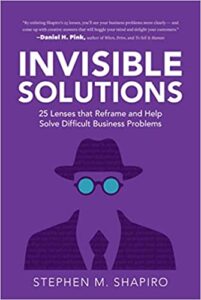 Stephen Shapiro cultivates innovation by showing leaders and their teams on how to approach, tackle, and solve their business challenges. Applying the knowledge he has accrued over decades in the industry, Stephen is able to see what others can’t: opportunities to improve innovation models and the cultures that support them.

The first innovation opportunity Stephen spotted was the opportunity to innovate within his own life. Halfway through his 15-year tenure at Accenture, while co-leading the company’s business process reengineering practice, he realized he no longer wanted to be responsible for people losing their jobs. So he did exactly the opposite by building Accenture’s thriving 20,000-person process and innovation practice focused on growth and job creation.

In 2001, after publishing his first book, 24/7 Innovation, Stephen left Accenture to become a full-time innovation speaker and advisor to clients around the world. Since then he has published four more books – Goal-Free Living (2006), The Little Book of Big Innovation Ideas (2007), Personality Poker (2010), and Best Practices are Stupid (2011) — and spoken to audiences in 50 different countries. His sixth book, Invisible Solutions, will be published in 2020.

Today, Stephen continues to focus on transforming the way businesses like 3M, P&G, Marriott, Nike, and Microsoft improve innovation practices through customized keynote speeches, advisory engagements, and other services. Passionate and captivating, Stephen’s high-energy approach to innovation gets audiences out of their seats and into new ways of thinking about their business challenges.

Stephen just finished serving a six-year term on the Board of Directors of National Speakers Association (NSA) and is the recipient of the Certified Speaking Professional (CSP) designation, NSA’s highest earned designation. In 2015 he was inducted into the Speaker Hall of Fame.

He has a degree from Cornell University in Industrial Engineering, which has helped him optimize the entire innovation process using the engineering techniques he learned there.

He was also involved with Girl Starter, a movement that encourages and enables young women to launch their own businesses. He was a judge and mentor on the television show (TLC) and has supported the speaking tour and other endeavors.